Halos and Hearts Foundation is dedicated to helping victims of natural disasters and bringing hope to families and individuals.  Since October 2017, Halos and Hearts have been dedicated to providing disaster relief from the devastation of Hurricanes Irma, Maria and Dorian.  Their efforts have helped hundreds of families and are made possible through the generosity of volunteers donating their time and financial resources, and they are currently working in Puerto Rico and The Bahamas. 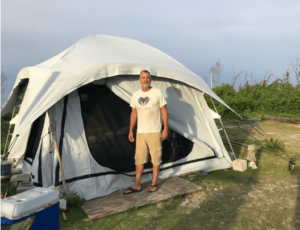 Ron Batt, one of the founders of Halos and Hearts, personally travelled to Grand Bahama on February 26, 2020 to evaluate the devastation from Hurricane Dorian and to help families and individuals recover from the great loss the island had suffered.  Through local connections, Ron found out about a small island at the east end of Grand Bahama called Sweetings Cay, a small fishing village with about 43 homes. Up to 90% of the homes on Sweetings Cay were destroyed by the hurricane.

Initially, Ron planned on staying in Sweetings Cay for 4 weeks, around the same time COVID-19 began to shut down borders. Having fallen in love with the island and the people, Ron decided to remain on Sweetings Cay to ride out the virus and lockdowns, while continuing to assist with the rebuilding efforts.

What was supposed to be a 4 week stay turned into 4 months, and Ron has enjoyed every minute helping local families to rebuild their lives.  There is still no power or running water on the island, so he has been living in an Alpinter RED Tent during this time. Ron notes that “while most tents have been destroyed on the island the RED Tent has been a trooper and has sustained several storms with winds up to 50 mph and driving rain”. 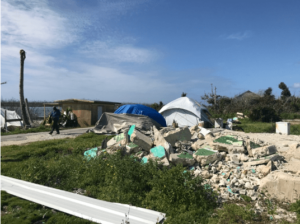 Alpinter RED Tents have been deployed throughout the Bahamas, most recently in response to the devastation wreaked by Hurricanes Irma and Maria in 2017 where supplies were airlifted from Alpinter stocks within 48 hours. RED Tents can be found in tropical zones across the world as lightweight and rapidly deployable shelters for families and support workers alike. We are proud to provide robust, well designed and high quality humanitarian relief items that provide safety and comfort for those affected by disasters worldwide.

About Halos and Hearts Bahamas

Halos and Hearts is a volunteer organisation dedicated to helping victims of natural disasters and bringing hope to families and individuals. Their goal is to continue to help as many residences in Sweetings Cay as possible to rebuild homes, docks and lives.  Funding is their biggest challenge, and donations are needed to continue this great humanitarian effort.  They would love to partner with other humanitarian groups to make this mission a reality.